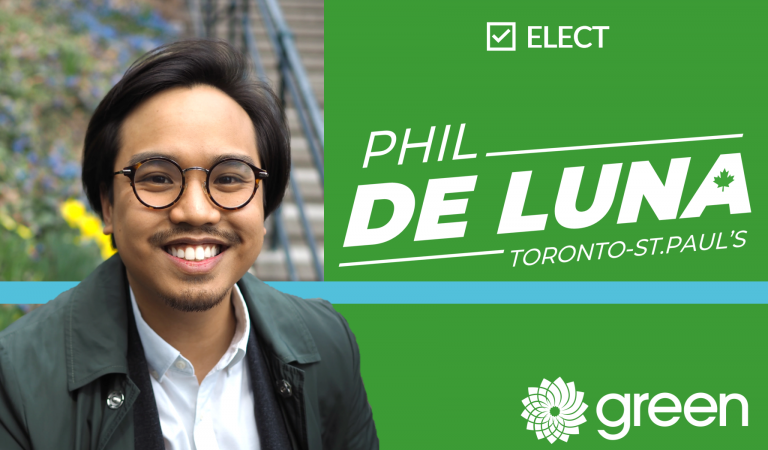 May 18, 2021 – TORONTO – Phil De Luna, a world-leading scientist and cleantech innovator, has been acclaimed as the Green Party candidate for Toronto-St. Paul’s.

De Luna was the youngest-ever Director at the National Research Council of Canada, where he led a $57M research program to develop disruptive clean technologies to decarbonize Canada. He is currently on leave to run for the Green Party. De Luna is an expert in clean technology, was a finalist in the Carbon XPRIZE, named a Forbes Top 30 Under 30, and is a Governor General Gold Medalist for his PhD research at the University of Toronto.

De Luna has already hit the ground running, securing endorsements from Former Conservative Senator Hugh Segal, Clerk Emeritus of the House of Commons Audrey O’Brien, and Deputy Leader of the Green Party of Ontario Dr. Dianne Saxe. “I have known Phil De Luna for some years. He is precisely the kind of hard working, creative, honest, and determined individual any party or constituency would want in parliament.” said Segal. “His experience in the world of science, research, technology and environment, reflects the expertise we need in government now more than ever.”

Under the leadership of Green Party Leader Annamie Paul, the Green Party recently launched the Time to Run campaign to recruit diverse, progressive community leaders as candidates for the federal election.

De Luna is focused on three main issues: supporting our essential workers, housing affordability, and green jobs that leave no one behind. “These topics are deeply personal for me. My fiancée is an operating room nurse at Sick Kids and an essential worker. Many of my fellow Filipino-Canadians often occupy low-paying but essential roles. My generation is increasingly feeling squeezed out of the housing market and is wondering, will we ever afford a home? Cleantech to fight climate change has been my passion, but more importantly I recognize the opportunity in sustainable jobs. I grew up in Windsor and know firsthand what happens when an entire community is dependent on one industry. My father, an autoworker, lost his job when Ford closed their assembly plant. I see the same thing happening in heavy emission industries today and we need to do everything we can to diversify and create a more sustainable economy for Canada, to ensure families have green jobs that will last.”