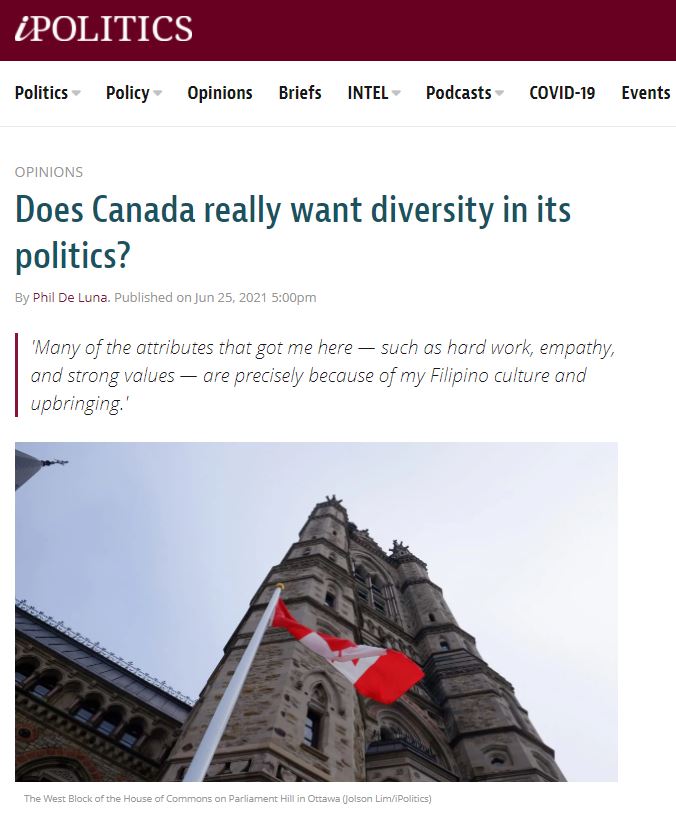 Phil recently published an op-ed in iPolitics, “Does Canada really want more diversity in its politics?”

You can also read it below here:

This past year has brought a reckoning of racial and social justice, starting with the tipping point of George Floyd’s murder in Minneapolis and Black Lives Matter, and continuing today with the murder of a Muslim family in London, Ont., and the discovery of more than 750 children’s bodies on the grounds of a former residential school in Saskatchewan. Many Canadians have been forced to confront racism in Canada’s past and present, and are demanding change for Canada’s future.

Diversity has become a loaded word that means many things to many people. All the ways in which we humans have chosen to categorize ourselves — ethnically and culturally, and by gender and sexual orientation — have become wrapped up in that one word. To me, diversity means differences of thought, opinion, and lived experience. It’s the sum of all these complexities that make up a person, and greater diversity encourages more people who are different to work together.

When put into practice, especially in the winner-takes-all world of politics, we’ve seen that our differences often lead to polarization. Different opinions and experiences should strengthen us by bringing us together, but instead they’ve set us apart. This makes me wonder: Does Canada really want diversity in its politics, or does it just like the idea of diversity and inclusion?

For example, Parliament recently lost a strong young Indigenous voice in the NDP MP for Nunavut, Mumilaaq Qaqqaq, who’s decided not to run for re-election. Her revelations that she’s been racially profiled, causing her to feel constantly uneasy in the House of Commons, is a sad reminder that Canada’s work on reconciliation is far from complete. Her damning farewell was raw, powerful, and impossible to ignore. Annamie Paul, the leader of Canada’s Green party, is facing infighting and turmoil within her own party, driven by what she says is sexism and racism. This has been particularly stressful for me, a Filipino-Canadian planning to run for the Greens in the riding of Toronto—St. Paul’s.

The barriers to entering politics are already high. They include not just financial costs, but risks to one’s mental health, relationships, friendships, and reputation. Systemic barriers exist too, and too often, groups who are under-represented in politics are discouraged from running because they lack networks, access to party leadership, and community support. Racialized people and women have the added challenge of race and identity politics, and are often judged on their appearance rather than their accomplishments.

Despite being Canada’s fourth-largest visible-minority group, Filipino-Canadians are under-represented, both as candidates and in Parliament. I’ve personally had a complex relationship with my racial identity, and was even ashamed of my heritage when I was younger. I wanted to be known for my work as a scientist and a clean-tech innovator, not for my visible-minority status. However, I’ve come to embrace my heritage, and to realize that many of the attributes that got me here — such as hard work, empathy, and strong values — are precisely because of my Filipino culture and upbringing. When I decided to step up as a candidate, I did so to bring more diversity to Parliament and more science to politics.

I am not alone in that desire. The number of visible minorities and women running and getting elected to office is increasing. Slowly but surely, Parliament is starting to reflect the diverse population it serves. Despite the setbacks and racism in our institutions, a larger number of diverse Canadians continue trying to improve them. As a scientist, I trust the data, and the data show that Canada does want more diversity in its politics. As we continue to increase the representation of different voices at decision-making tables, more conflict is inevitable. But I choose to remain hopeful that this shows our institutions are maturing, and that this growth, no matter how painful, will lead to a stronger Canada.